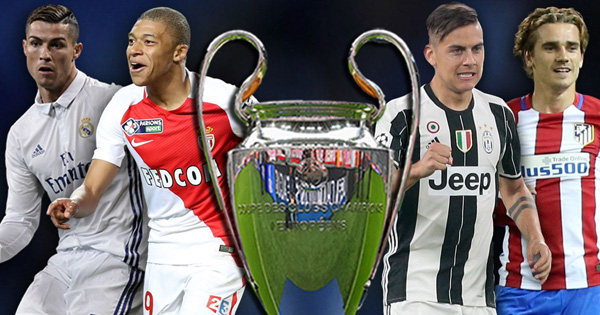 
Only two can lock horns in Cardiff on 3rd June. We asked local football writer Ryan Weston for his tips on how the semis will unfold and who will make it to the Millennium Stadium:

You just feel that this could come down to an individual piece of magic, or someone having a rush of blood (read Sergio Ramos…).

For Real, having Gareth Bale unavailable for both legs is a serious blow. Their recent El Classico defeat could also play on their minds, with the La Liga title race going right to the wire.

For Atleti, they have to be favourites now they have knocked out Leicester!

In seriousness, we know what they bring to the table. A stern defence, an army-like organisation with skills and know-how to boot. Out of the title race themselves, they will be fully focused on avenging last season’s final loss to their near neighbours.

This is a fascinating one to call. The imperious Juve defence (they didn’t concede at the Nou Camp!) vs the free-flowing young-guns of Monaco.

While the ‘Old Lady’ will have been pleased to have avoided the Madrid giants in the draw, the Ligue 1 leaders possess an altogether different test.

Much will depend on the evergreen trio of Buffon, Chiellini and Bonucci if the Bianconeri are to progress.

However, in Kylian Mbappe, the principality outfit have one of Europe’s most exciting prospects. Tipped to follow Anthony Martial to a major player this Summer, this tie presents another opportunity for him to place himself firmly in the shop window.

So who goes through?

As you’d expect and want at this stage of the competition, both ties are extremely tough to call!

Madrid is sure to see fireworks over the next couple of weeks. This will go down to the odd goal, with more than one red card almost a certainty. Head on the block, I’m going to go for the resoluteness of Atletico to sneak through after extra-time.

The other tie is likely to be just as close. A lot could depend on how this week’s game at the Stade Louis II unfolds. Experience though counts for a lot in the Champions League and with that in mind, I’ll go for Juventus to join Atleti in Cardiff.

And who would begrudge Buffon another chance to add a Champions League winners medal to his portfolio?’